After a long hiatus, I finally found some time to update this blog. I’ve been really busy with multiple projects. Few of the projects are coffee gadgets related which I shall unveil when they near ready.

Today I’d like to share the progress of the espresso machine mod I mentioned in an earlier post Espresso Machine Zhng. My home espresso machine is now capable of gravimetric espresso extraction, and it can be programmed easily through an mobile app. Like all good experiment report, I shall start with the problem statement.

Problem statement: My home espresso machine, the Bezzera BZ13 is manual push-button machine. It is reliable for home usage but it is primitive and lacks features. Higher-end machine comes with programmable feature which allows limited espresso recipe to be dialed-in. These recipes are either based on extraction time or volume of water which flowed through the pump. Ben Kaminsky highlighted in this article that weight-based dosage produces more consistent coffee vs time-based dosage. Matt Perger conducted similar experiment in a busy cafe setting and the video can be found here.

Solution: To implement a low-cost weight-based dosage feature into home machine which is programmable through an mobile app, hence the espresso recipe will be virtually limitless.

The following images show the interfaces of the espresso controller mobile app I wrote. The image on the left shows the flow rate, espresso extracted and the total volume of water used in extraction. The graph gets updated in real-time during extraction and the extraction profile can be saved for reference. I’ll get a video demo up when i’ve the time. The image on the right shows the interface which allows the espresso dosage and target brew ratio to be dialed in. 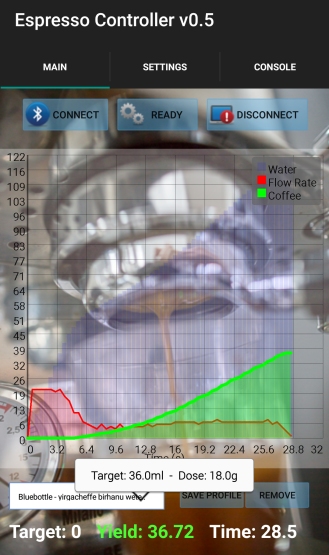 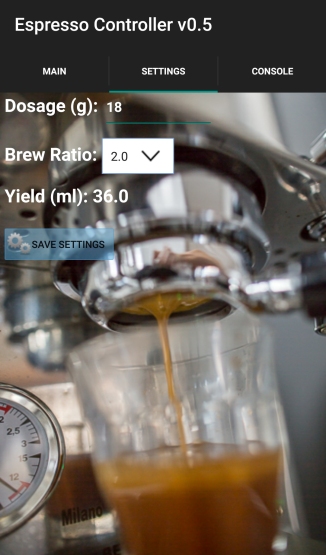 When I started the project, I was using 2 flow sensors shown in the following diagram. Similar to espresso machines marketed with the ‘volumetric dosing’ feature, flow sensors are used to detect the espresso yield, either at the pump in-let or group head. For cost-reason and the fear of working directly with high heat high pressure, I opt-ed for flow sensors in the pump inlet and OPV outlet.

The flow sensor has a impeller which spins when water flows through it.

The impeller generates pulses when it spins and the number of pulses were collected to measure the volume of water which went into the coffee. The pulses to extraction ratio are different for each unique blend of coffee, and I wanted something which works for all coffee and does not require re-calibration of the pulses to extraction ratio, hence, a scale was added to the project. Alternatively, I could have measured the flow-rate in the group head instead of from the pump in-let, however, such flow meters are not cheap.. and too hot to deal with 😐

Once the target weight is detected by the scale, the pump will be cut-off electronically by the relays. The flow sensors are now used to indicate the start of the extraction and the data collected from them are shown in the mobile app (red coloured chart). It can be useful for flow-rate profiling too (separate mod for another project).

This is the first iteration of the minimalist scale which is wired to the controller. It is self-made too, and I’d have used an Acaia if it is developer friendly.

The load cell (weight sensor) is protected by a piece of thick 5mm acrylic which is pretty heat resistant. This is important as the load cell’s reliability can be affected by temperature changes.

And the current version which is wireless though not so minimalist now. 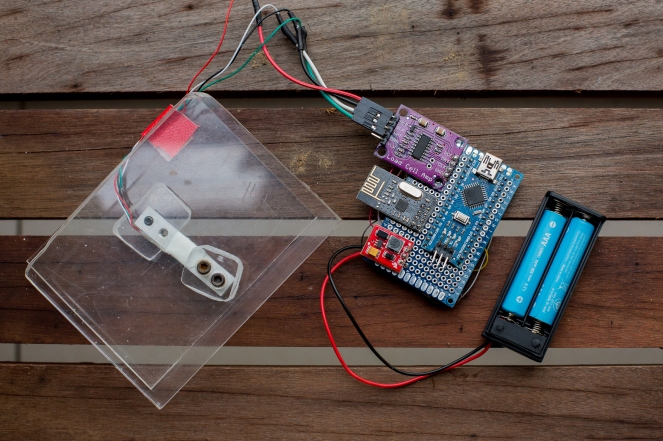 The hardware controller is powered by Arduino microController which talks to mobile app via Bluetooth. Nordic transceivers are used for wireless communication between the microController and the scale.

I am now in the process of fabricating drip-proof enclosure for the scale. Hopefully I can get the third iteration of the scale soon and then the video demo will be available 🙂

Updates: This is how the fourth iteration of the scale + mobile app looks like

So much for the short updates, please do share with me ideas or features you would like to see available 🙂

You might have read my blog post on Tan Lee Et food industry and Haoxian, the really young Q-grader who is helping his family in the coffee roasting business in Singapore. We can finally purchase specialty grade bean roasted in the same facility by Haoxiang 💪 Check out @pyroast for the yummy selections 👍☕ .. and that beautiful box 😁
Very flavourful coffee with many different flora and fruity sweet notes. My wife and I were very impressed with the coffee made with this coffee at @wakeysg we had to bring the beans home. The La Palma y El Tucan were grown in Colombia and was used by the World Barista Champion @jeon_jooyeon to win the title in 2019! I was actually in Busan/Korea about a month before the competition, and am still regretting for not making a visit to Jooyeon's cafe 🤣 If you like to taste the coffee made with this beans, they are available at @wakeysg, the beans are roasted by our very own Singapore Barista Champion @zennsoon 💪Thank you for the recommendation Zenn 👍☕
Have you tried coffee made from frozen ❄ coffee beans? These are the rarer coffee beans stored in a specially set up facility to maintain the freshness of the beans beyond the usual shelf life. Think competition standard beans which are usually imported and roasted in smaller quantity, or any limited beans the @ppp.coffee's team adore. To preserve the beans' freshness further, the beans were packed individually for single order, and unpack only on demand to be grounded with the super advance Mazzer ZM grinder. Probably the only place in Singapore in a cafe setting to enjoy such coffee at the moment. The last time I had coffee made from frozen beans was at @jeremytan86insta's place. Check the 'Archive menu' at the brew bar at @ppp.coffee in @funansg for the available archive coffee 👍☕ Thank you @marcusfoo for modeling with the frozen beans and menu 😄
Congrats @ppp.coffee on your grand opening at @funansg 🎉 From the same team behind Chye Seng Huat hardware. You can find many new geeky coffee tools such as the @kvdwespressonisticworks Idro-matric espresso machine, super advance Mazzer ZM grinder with auto calibration feature ..etc. You will also find the familiar good coffee selections here. Single-origin espresso option is also available for the more adventurous folks 😋. Most impressed with the Archive coffee available at the pour over bar which i'll write in the next post. Incase you are wondering, Papa Palheta is now known as Ppp Coffee, they have even adopted the colour of coffee cherry for their retail coffee bag. Thank you @ppp.coffee for the special preview invitation 👍
Intimate cafe with lots of characters and great coffee in Busan. Kindof the vibe you get from most of the bussinesses in Busan. We had 2 different filter brews that were available on the 'wooden block' menu and an espresso made with a manual level espresso machine from La Pavoni 💪The filter brews were really sweet and juicy, I was surprised with the quality of the espresso! Also interesting is the heavy duty Mahlkonig VTA6S grinder and a free roaming cat in the shop 😄 Thank you @naive_brewers for the hospitality and coffee and @duffwhaler for the recommendation👍☕ There are few other cafes and restaurants located in the same quiet alley which is a good getaway from the main and crowded Jeonpo district.
Gesha galore at @centercoffee. This is at one of the pop-up located in Gangnam as I couldnt find the time to visit the main branch. Check out the gesha selections on the menu 👍☕ Thank you @marcusfoo and @irixyzify for the recommendation!
Had a super yummy filtered coffee with tropical fruit notes of mango and papaya at @5brewing. Available as a special blend in the menu. This is also the home of the brew master! Spent a wholesome hour browsing through the coffee books here 👍☕
Visited @anthracite_coffee_roasters today which is 'almost' hidden inside an old industrial compound. It kindof reminded me of an underground club 😂 This is another cafe which takes specialty coffee seriously and bakes pastries in-house 👍☕ Thank you @deathpenguins for the recommendation!
Not only are the coffee really good (had 4 cups in one visit), the pastries are freshly baked in the shop too! No doubt, @fritzcoffeecompany is an already well known place for coffeegeeks with so many varieties of coffee to choose from. Love the cheese tart too 😋Had a really good experience here this morning 👍☕
%d bloggers like this:
%d bloggers like this: